Fifty-seven-year-old Takeshi has just been involved in a traffic accident. When he wakes up, he is in a strange bar, no longer crippled as he has been for most of his life, but able to walk without crutches in his everyday business suit. Looking around, he sees a number of familiar faces – Izumi, a colleague who had died in a plane crash five years before; his childhood friend Yuzo, who had become a yakuza and had been killed by a rival gang member; and Sasaki, who had frozen to death as a homeless vagrant.

This is Hell – a place where three days last as long as ten years on earth, and people are able to see events in both the future and the past. Yuzo can now see the yakuza that killed him as he harasses a friend of his. The actress Mayumi and the writer Torigai are chased by the paparazzi into an elevator that drops to floor 666 beneath ground level.

The vivid depiction of afterlife in Hell includes the traditional horrors, but subjects them to Tsutsui’s unique powers of enchantment. Witty, amusing, unparalleled for its poetic style and the wizard-like light touch of the author’s shifting focus, Hell is one of Tsutsui’s most haunting works. 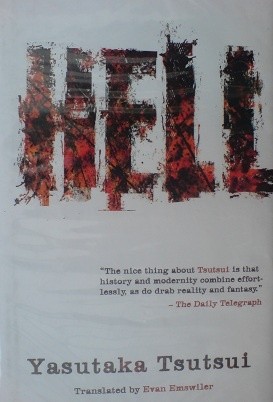